How to disable the annoying Skype update notifications completely and forever

I just can't help sharing this: the extremely annoying update-your-version-of-Skype reminders CAN be disabled after all. Like many users, I've tried all "legitimate" ways to get rid of the pesky alerts, but whatever alert settings you change, they still pop up. Apparently, MS desperately wants us to download every update of Skype, which increasingly turns into bloatware.

However, the way to turn the reminders off does exist. Some users have noted that whenever a new version of Skype comes out, the program downloads it into a temp folder under the name SkypeSetup.exe. Upon finishing the download it pops up the aggravating alert, and does it again after every other action you perform in Skype. So the way to get rid of it is, basically, to create a file with the same name and make it read-only.

2. Locate SkypeSetup.exe in the folder (if the file is not present, check out the %TMP% folder the same way) and delete the file

3. Create a dummy empty SkypeSetup.exe in the %temp% folder:

5. Type the word Everyone in the "Enter the object names" field, then press Ok

6. Now select Everyone, and check the "Full Control - Deny" checkbox. Press Apply, then Ok the warning question and the dialog.


There you go: from now on your Skype would be able neither to download its updates nor to display the maddening pop-up windows!


You can also do everything above with the method 2 (automatic):

1. Create a fixskype.bat file consisting of the following two lines:

2. Run the batch file under an admin account. This one can also be helpful if you plan to re-create the updates-blocking file regularly (e.g., if you prefer to clear %TEMP% contents on every system startup).
Posted by Unknown at 05:08 3 comments:

Why would one need Unicode playlists anyway? Well, I download lots of music, and not all of the artists and track names fit into the ASCII character set. There is not too many playlist creation programs out there, and some of the existing ignore folders with non-ASCII names, like this one:

Luckily, the latest version of the highly automated mp3 tagger taghycardia, which I already wrote about previously, comes to help: the version 0.99.3 has an integrated configurable Unicode Playlist Generator. Not only it recursively creates Unicode (.m3u8) playlists for MP3 folder trees, but also offers some useful options. 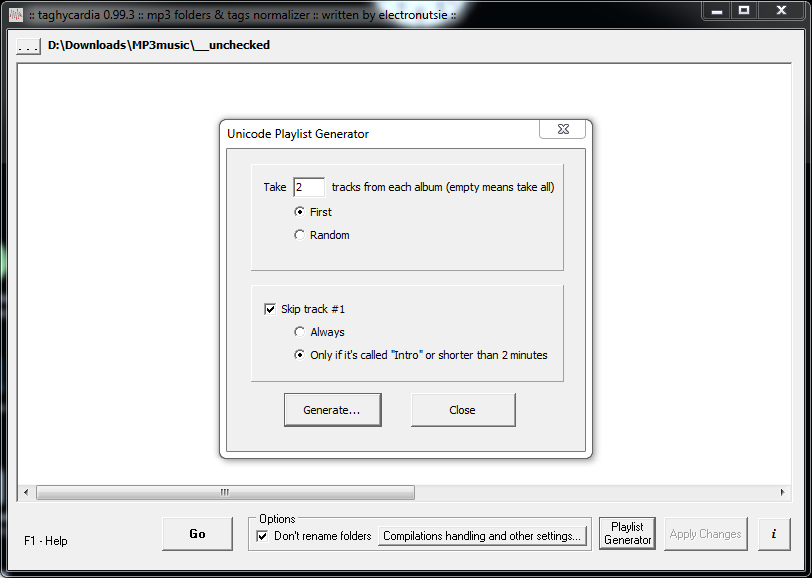 First, you can limit the number of tracks to include in a playlist from each album. Those could be either the first N tracks of a folder or N tracks chosen randomly from each of the folders.

Second, you can avoid including introductory tracks in playlists. Sometimes, the first track of an album is an "intro" that is intended by an artist to set the mood for what you are about to hear, but when you need to taste several albums quickly, you often don't have time or desire to listen to the prelude tracks. So, taghycardia's Playlist Generator is able to skip track #1 of an album while creating a list whenever the first song is called "Intro" or its duration is shorter than two minutes, which too could indicate it is being an introduction.

Note that in addition to Foobar, m3u8 playlists are supported by Media Player Classic, and a number of other other modern media playing software.
Posted by Unknown at 21:58 No comments: